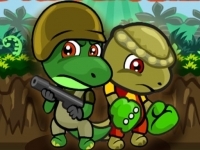 87%
Instructions
How to Play?

Two dinos which creates the dinosaur team wants to beat their enemies by doing union of forces On the adventure that they embark they aim to complete the missions successfully by collecting golds One of the dinosaurs can pass through the walls without stopping at nothing and the other one can take down the enemies with the gun The cute dinosaurs will reach the success if they do cooperation in the adventure Enter to enjoy playing Dino Squad Adventure game without any charges at kizi4school.com. Dino Squad Adventure is one for our amazing Kizi 4 school games to play and having fun.