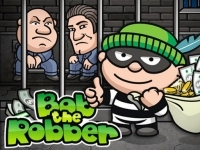 88%
Instructions
How to Play?

Steal treasures, avoid cameras and take out guards in Bob The Robber 1, a fun stealth puzzle platform game! Bob knew his destiny from a young age. He trained hard for years to learn his trade. After years of practice Bob decided to sneak into the club and steal the treasures! Bob The Robber is a terrific game which you can play for free in in kizi4school.com. With Bob The Robber game, we supply many cool Kizi 4 school games to play at no cost.